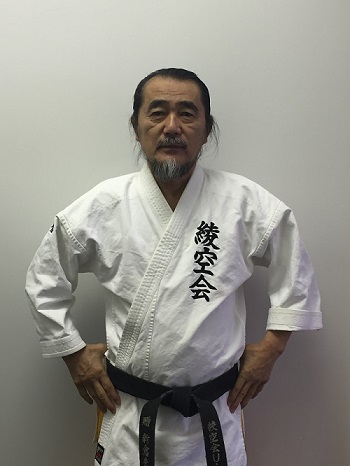 Katsumi Niikura was born on 1943 in Japan.   In 1955, at the age of 12, Niikura began to study karate and judo. At the time, karate was not well thought of.  Many people in Japan associated Karate with organized crime and the criminal classes.  So, he began to study Karatedo 'on the sly', without his parents knowledge. In the late '50s, he won a Junior Championship at the prefecture level (equivalent to our state level).  A neighbor, reading of it in the paper, came over to congratulate his father and this is how his parents found out that he was studying Karatedo.  He continued to study Karate and Judo through high school.

In 1961, at the same time he was increasing the intensity of his physical training, Niikura began to seek a balance in his life by pursuing restful, mental training in the form of Ikebana, the Japanese style of flower arranging. As members of the warrior class of Japan had for hundreds of years, he found that Ikebana added harmony to his life and an inner peace that allowed him to continue to excel to greater plateaus in his martial arts career.   In 1963, Niikura was elevated to the rank of Shodan (1st degree black belt).  In this same year, he began to study other styles of karate as well as Aikido.

In 1967, Niikura was elevated to the rank of Sandan (3rd degree black belt). In this year, he also won the All -Japan/Asia Karatedo Championship in kumite (sparring). Since the kumite competition had no weight classes, it was quite a feat for someone standing only 5’3” and 130 pounds to win!  It was in 1967 that Niikura was also awarded his Ikebana teacher's license. In 1968, he began to study Iaido (samurai swordsmanship) under Nakamura Taizaburo (founder of Nakamura-Ryu). He also made his first trip to the United States this year, where he gave karate exhibitions.  It was during this trip that Niikura became aquatinted with Don Madden (head coach for the USA Karate Federation - USAKF).  This trip was the first of several exchange visits between American and Japanese martial arts students coordinated by Niikura and Madden.

At age 30 in 1973, Katsumi Niikura founded International Ryokukai Karatedo, a Karate school based on the best of what he had discovered through his study of different Karate styles, Aikido, Judo, and Iaido. In 1976, the first Ryokukai dojo outside Japan was founded in Brazil (International Ryokukai Brazil).  In 1979, Niikura accepted Tokey Hill, an American sport karate competitor, as a student at his Japanese dojo. Hill trained with Niikura daily, and was eventually promoted by Niikura to the rank of sandan.  Tokey Hill become World Light Heavyweight champion in kumite in 1980.  He was the first American ever to place so highly in karate competition.

In 1984, Katsumi Niikura moved to the US and in the process moved the home dojo of International Ryokukai to Sterling Heights, Michigan where it resides today.  Sensei Niikura continues to be active within the dojo, teaching several classes each week.